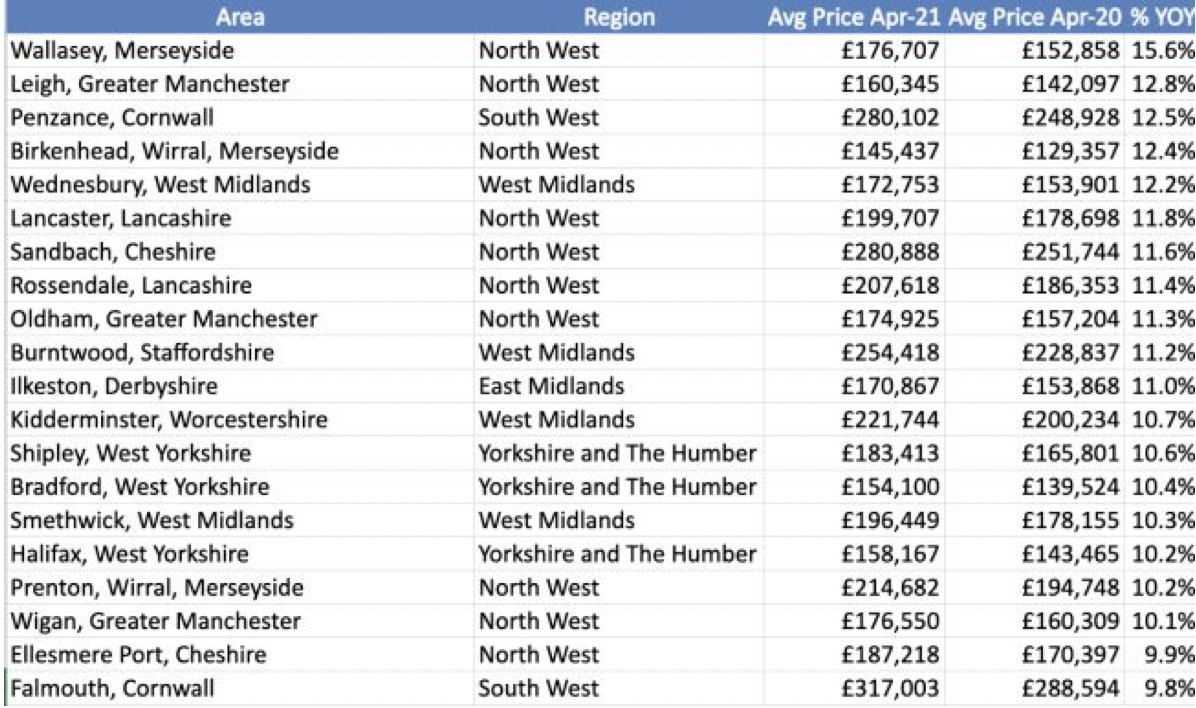 This week marks a year since the property market reopened following the first lockdown restrictions in England. As we know, it has been quite a year for the housing market with pent up demand following Brexit, and then a national lockdown, meaning more homeowners than ever have been reconsidering their living environment.

So which areas have seen the biggest hike in property values and which have lagged behind the front runners?

According to Rightmove, Wallasey in Merseyside has seen the highest rise in house prices in the UK – where properties have gone up by at least 15% from last year.  A year ago, the average house price in the area was £152,858 – it’s now £176,707. This was followed by Leigh in Greater Manchester where the average property price has risen by 12.8 per cent to now stand at £160,345.

It’s clear to see from the above table that the North West has outperformed most other areas with house price growth at 12.4%, followed by Yorkshire and the Humber (10.3%).

Interestingly, the traditional north-south divide on house prices has been turned on its head, with London the UK’s worst-performing region and north-west England topping the table.

According to Nationwide’s figures for the first three months of 2021, London was the UK’s weakest performer, with annual price growth falling to 4.8%, down from 6.2% in the final quarter of 2020. Of course there are a few anomalies if you were to look at specific areas of London.

Rightmove says that a quarter of all properties now sell within one week of going on the market – the fastest it has ever recorded.

However, Location Location Location presenter Kirsty Allsopp recently spoke of her concerns at the heated property market while filming a new episode of the Channel 4 show looking for properties in Cheshire and North Wales.

She said at the time: “The market is scarily heated. Given the fact that 17 percent of people are still on furlough and the economic impact of Brexit and Covid is unknown this feels troubling.” Frankly, we couldn’t agree more.

A shortage of people selling their homes means that demand from buyers is increasingly outstripping supply, accelerating house price rises across the UK. Of course, what this also does is leads to the collapse of property chains. Because of the buoyant market and covid measures, the vast majority of estate agents have been advising prospective buyers that they must be proceedable to even view a property i.e. they must have nothing to sell or already have accepted an offer on their own property.

This not only limits estate agents carrying out unnecessary viewing with people who are not particularly serious about moving, but also gives sellers a good selection of proceedable candidates from which to choose.

However, whilst many buyers have gone ahead and ‘sold’ their houses over the last view months, we are now facing a situation where many of these homeowners can’t find anywhere to move to. Some buyers are accepting of this and willing to wait, but the risk of a large number of chains collapsing is increasingly likely.

So, whilst agents are rubbing their hands in glee at the ever-rising commission they will receive when these sales complete, at prices extortionately inflated versus a year ago, there could be a long wait for some.

If you wish to sell but would prefer not to put your property on the open-market through a traditional estate agent, perhaps you want to avoid the agent fee or don’t like the idea of multiple viewings at your home, WeBuyProperty can offer you a no obligation valuation to purchase your property for cash.